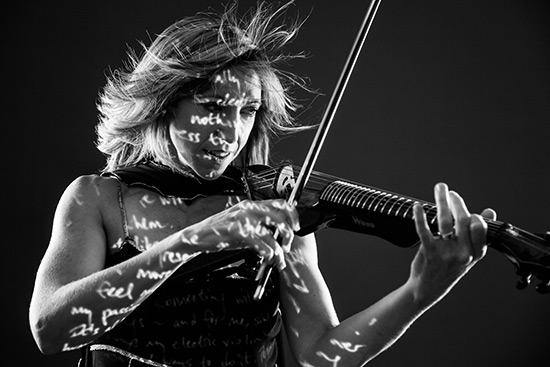 Val Vigoda is a valued Artist Mentor on the Electrify Your Symphony team and we’re thrilled that she’s returning this summer to bring her incredible talents to MWROC. Val is a live-looping, electric violinist, singer/songwriter, and a founding member of the band GrooveLily. She has toured the world with Cyndi Lauper, Joe Jackson and the Trans-Siberian Orchestra and is now touring the solo, multimedia, music concert Just Getting Good.

Her latest venture is Ernest Shackleton Loves Me, an off-Broadway show that also aired on PBS.

Val studied at Princeton University and has taught at Stanford University, Emerson College, and the Berklee College of Music. She has co-written songs for Disney’s Tinker Bell movies as well as the scores for ten stage stage musicals which have been produced from McCarter Theatre to Off-Broadway. Valerie won the Jonathan Larson Award, the LA Ovation Award for Best Musical, and the ASCAP Richard Rodgers award.

Val lives in LA with her 10-year-old son Mose.