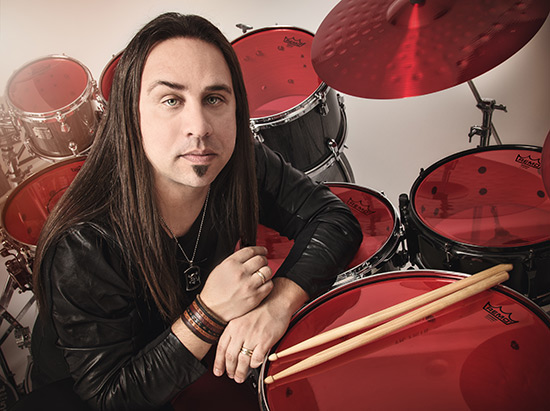 As a session drummer, Jason has recorded many television & radio commercials for clients such as Toyota, Discover, McDonalds, Showtime, the Oakland Athletics, Izusu, Polaroid, the California Lottery, PBS, Sprint, Capital One, Foster Farms, Blue Shield and many more. You can also hear Jason’s drumming throughout early episodes of the hit show, Hannah Montana, aired on the Disney Channel, however, his most familiar session work is his playing on the opening theme song drum tracks for the popular Nickelodeon children’s cartoon Spongebob Squarepants.

He is the co-author of the popular drum book entitled “The Drummers Bible” and is the featured drummer on the 2008 Hudson Music DVD called “Set Up, Tune and Play Your Drums.” Jason was the back up drummer for the Trans-Siberian Orchestra and is a guest artist on their popular platinum selling CD entitled, “Night Castle.” He has toured with progressive artist Neal Morse, has played on both the touring troupe and the Broadway production of ‘Rock of Ages,’ and was the house band drummer for the Hispanic version of the TV show “The Voice,” entitled, “La Voz, Kids” on the Telemundo network.  Currently, Jason tours with the Mark Wood Experience as well as Marc Martel & the Ultimate Queen Experience (the singer behind Rami Malik on the Bohemian Rhapsody Queen biopic).  He is endorsed by Yamaha Drums, Paiste Cymbals, Remo Heads, Vic Firth, Humes & Berg, Kickport Products, DrumTacs and HudsonMusic.