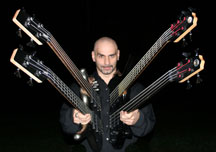 Paul Ranieri was born in New York City and raised in a musical and artistic environment. He started studying music and playing bass at age 11. Influenced early on by the music from cartoons, science fiction and monster movies; and then later by all the greatest rock, funk, and jazz bass players, Paul is now involved in many diverse musical projects and has developed a melodically ferocious and powerful playing style all his own.

With a degree in Jazz Performance from New York’s New School University and Mannes College of Music, Paul’s talents encompass a high level of technical expertise and professionalism. Paul is currently the bassist for producer, inventor, Emmy Award-winning composer, and highly acclaimed international recording artist Mark Wood, and has been touring the US with Mark’s “Electrify Your Strings” series of music education programs; working alongside Mark to participate in the creation of rock orchestras with student musicians at schools and universities across the nation.

Paul has been a teacher and music educator since 1990, having taught at San Diego’s only professional bass shop and music school; Bass Alone and at Sam Ash Music University and also has a successful private teaching practice. Paul is also leader of the band Dangered Ace, whose debut CD “GoTenGo” was recently released to great acclaim.

What to expect in Paul’s classes: